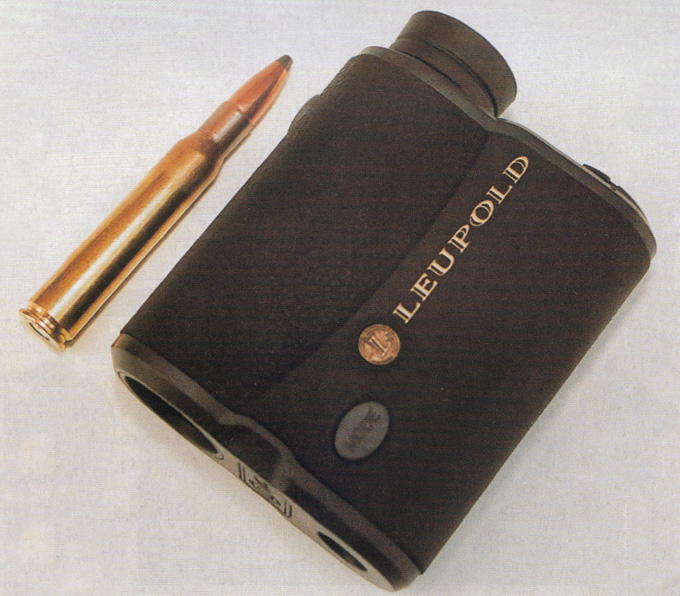 ABOVE : Leupold's RX-1000 TBR is small enough to fit in your shirt pocket. Shown alongside a .30-06 cartridge for comparison. Mode switch is on side.

BEING A GREAT believer in the K.I.S.S (Keep It Simple Stupid) philosophy, I was bound to fall in love with Leupold's new simplified rangefinder. The new RX-1000 TBR has 6x magnification, a 22mm objective lens, a 6.0 degree field of view and ranges most objects from 10 to 1000 yards or metres with an accuracy of plus or minus 1 yd. It's the most compact unit I've seen to date measuring 96.50mm long, 71mm wide and 33mm thick. In fact, it's small enough to fit in a hunter's shirt pocket.

The RX-1000 is easy to use. Locate the object of interest through the 6x monocular, press the power button and a reticle appears in the view of the monocular.

You align the reticle on the object being viewed, hold the rangefinder steady, keep pressing the button and the laser will activate. It sends a laser beam out to the target, which bounces it back. The tiny fractions of a millisecond its takes the beam to travel forth and back are measured by a mini-computer inside the rangefinder. An illuminated display will register the distance as shown in the image field. The distance will automatically update as the power button is continuously pressed. 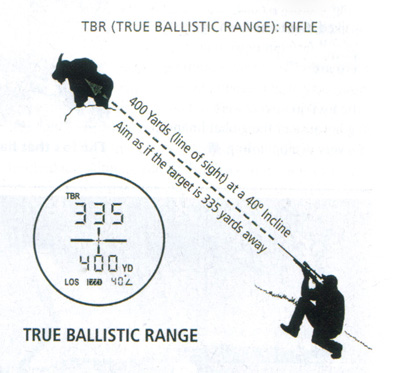 Laser rangefinders function most reliably when the target is flat, hard and light coloured - what is known as a "cooperative target,"- and with few exceptions most game animals are uncooperative. As well as seldom standing still they are usually round, soft and generally non-reflective being greyish to dark brown in colour. Laser rangefinders generally work best in dull light bcause there's less outside interference with the laser beam.

Like most modern rangefinders, Leupold's RX-1000 has several operational modes. The mode most hunters will use is "SCAN." In that mode, the hunter can instantly range objects at varying distances by keeping the power button depressed and centering objects being ranged in the unit's aiming device - a bright reticle in the incredibly bright (but intensity adjustable) OLED (Organic Light Emitting Diode) display. It instantly ranges moderately reflective targets as far as 1000 yds. (914 metres), trees to 600 yds. (549 metres) and deer to 500 yds. (471 metres) with the simple push of a button above the eyepiece. 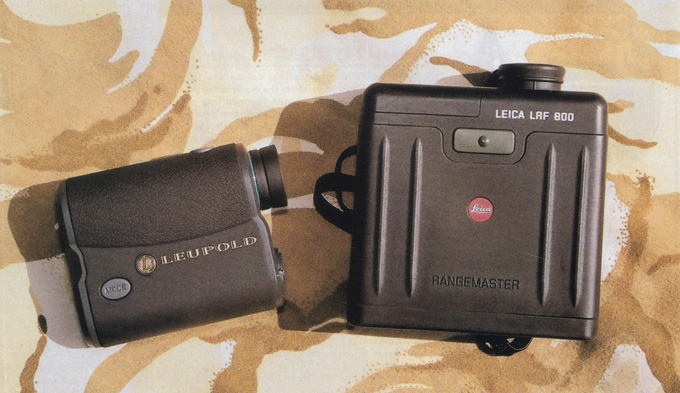 ABOVE : The Leupold RX-1000 TBR is smaller and more compact than the Leica LRF800 and has many different modes.

Leupold says the RX-1000 works out to 1000 yds., but in reality it's calibrated to 999. Anything farther away doesn't register on the OLED inside the viewfinder. It will give accurate readings about 80 percent of the time, unless the target is really uncooperative - out past 800 yds., in bright sunlight, and that's too far for a hunter to be shooting at game in any case.

The Last Target Mode is used to display the distance to the farthest object when more than one object may be read. The RX- 1000 can eliminate readings at short distances, so intervening brush or rocks doesn't confuse the reading on a deer 200 yds away.

Multiple objects will often return an average distance; Last Target Mode ensures an accurate reading on the farthest object. The mode button allows you to select one of three reticles - the Plus Point, Duplex with Plus Point or Duplex without Plus Point.

The LOS (Line of Sight) range is shown at the bottom of the internal OLED display in yards or metres depending on which is chosen. It is always on in RX-1000 models. OLED does not account for angle or ballistics. And the TBR and BOW readout (True Ballistic Range) is shown at the top. The TBR is powered by a CR2 battery that's good for at least 2000 measurements. 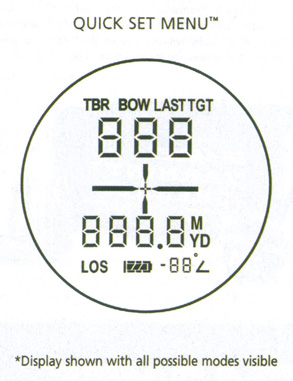 Battery status and mode are shown at the bottom of the display. Readings will continue to display for several seconds after the power button has been released, afterwhich shut-off is automatic.

When you press the Mode button first the Quick Set Menu appears allowing access to other functions, like TBR which allows you to determine the correct aim for certain conditions, such as when shooting at a steep angle uphill or down. For example, if you are shooting a .270 with 130gn bullet at 3050fps up a 30 degree incline at 400 yds., the direct line of sight, the TBR acts as an inclinometer and the output, will be 367 yds.

The rifleman can access adjustment or holdover information on the display. The TBR mode consists of three functions: MOA, HOLD and BAS. MOA displays the minute of angle correction; HOLD displays the inches or centimetres to holdover the the intended point of impact and BAS outputs the equivalent range to use with Leupold's BAS (Ballistics Aiming system) reticles or the equivalent horizontal range. TBR settings are effective up to 800 yds. for most cartridges. 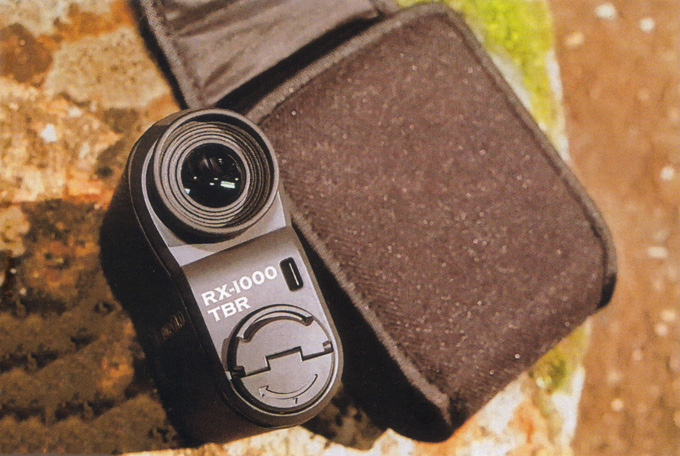 ABOVE : The rangefinder can be used as a 6x monocular for woods use. Battery compartment is located under the eyepiece.

TBR offers settings for seven different cartridge groups specifically formulated for the three functions of TBR, which are displayed as A, B, C, AB, AC, BC and ABC.

You consult the chart which accompanies the RX-1000 TBR and choose the group that conforms with your cartridge's muzzle velocity and load ballistics.

TBR performance groups are claimed to provide less than one half a minute of angle of error in aiming out to 500 yds.

The BOW mode is for archers and provides the correct range for arrows. It incorporates three different groups for bows with different draw weights and velocities of less than 215fps up to 250fps and more.

This mode allows you to choose any one of the 3 preloaded reticles as the primary aiming point for the RX-1000 digital laser rangefinder. To select a reticle, press MODE repeatedly until the current reticle is blinking. Press POWER repeatedly to scroll through the available reticles, then press MODE when the preferred reticle is shown. The reticle choices are as follows:

Testing a laser rangefinder is easy enough. I took the RX-1000 TBR to a military range with markers from 200 to 1000 yds registered without any hassles. One evening I ranged roos feeding on the flat in front of my home with both the Leupold and my Leica and found very little difference in their readings.

Leupold's compact RX-1000 TBR is completely weatherproof, features multi-coatcd lenses, and fold-down rubber eyecups. It has a rugged alloy chassis and is available in black or Mossy Oak camo This laser rangefinder will find favour with mountain hunters in particular because of its light weight and small size. It will fit easily in a shirt pocket and is quick to use. Brush and woods hunters will undoubtably use the RX-1000 to replace their binocular as I often do. Likely selling price in black around $700 and expect to pay about $50 more for the camo model.