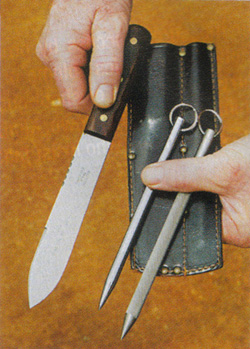 It is said that a single knife cannot effectively perform all of the cutting tasks that turn up. For the most part, this is true, but one knife, a not-so-well-known knife these days, goes a long way towards doing so. It has been referred to as a hunter's dadley, a deck or sailor's knife and a butcher's knife. Few knives indeed can boast being recorded under three distinct categories of knife application.

It is difficult to determine the origin of this spear-point knife concept. The origin of the name is also unknown. Speculators have advanced two unsubstantiated theories: that Dadley was the name of a revered English cutler of the early 1800s, and that it was named after an American frontiersman of the same era.

We do know that the dadley is recognised as one of the famous three Frontier knives advanced by New England Yankee John Russell of Green River Works in Massachusetts around 1834. A hunter and a skinner completed the trio of trade blades used and traded extensively by buckskin-clad mountain men, buffalo hunters and pioneers who 'went West' to settle America.

We know too that Sheffield cutlery manufacturers exported large amounts of dadleys bearing English trademarks and blade stamped 'Green River', probably at the behest of Boston knife importers because of the expanding popularity of what ultimately became the legendary trademark ofJohn Russell. New England hunters and trappers used round sharpening steels that were often sewn into knife sheaths for ready accessibility.

Among Sheffield cutlers, governed by a guild formed in 1614, were enterprising firms extensively exporting bladeware to colonies throughout the Commonwealth (British Empire), including Australia from 1788. One of them was John Wilson (trademarks J Wilson & I Wilson), whose 'four peppercorns and a diamond' trademark was granted in 1766 by 'the Corporation of Cutlers of Sheffield and Registered at the Government Trademarks Office, London, and in all the Principal Countries of the World'.

They marketed the dadley knife concept as a sailor's knife (deck knife). The sharpening steel was replaced by a marlin spike sewn into the sheath and the knife-spike combination was applied to ropework on board sailing ships trading globally around the colonies in conjunction with the English East India Company (1600-1857). English whaling and sealing ships sailing to the Antipodes in the 1800s would have had dadley-deck knives on board.

Later models were stamped 'Green River', indicating that American whalers and sealers out of Nantucket and trading ships out of Boston carried Sheffield-made dadley-deck knives.

The old Wilson catalogue also clearly features the dadley-deck knife concept under butcher's knives, in particular, counter knives - the blade characteristics are distinctly the same. Make that a dadley-deck-counter knife! If the multipurpose concept was so universally popular in the past, why isn't it now? The answer is simple: the concept is not aesthetically appealing, but it's as practical now as it ever was.