Knives Of The Cowboys 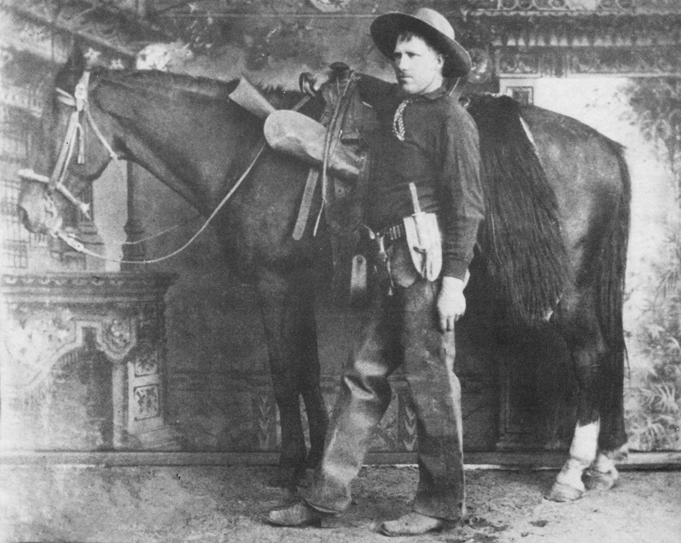 ABOVE : The quintessential cowboy - with faithful knife, six gun, rifle and mount - pauses just long enough for the cameraman before hitting the lonesome trail.

The cowboy of the American West has always been a romantic figure, with his wide-brimmed hat and high-heeled boots, carrying his six-gun and long-blade knife at his hip. When one thinks of cowboys, visions of shootouts, quick-draw artists and notched guns appear. But it was the knife, not the six-gun, that the cowboy depended on most for survival in the Old West.

In the 1870s, the heyday of the storied trail drives on the Chisholm Trail, most cowhands were young men fresh from the Civil War. In that bloody conflict, the combatants employed the Bowie knife as an all-purpose tool in hand-to-hand combat, for digging, etc. As a result, these soldiers-turned-cowhands brought their long-blade Bowie knives on cattle drives for utility and defense.

The name Bowie was a generic term for any long-blade, clip-point knife with a metal guard resembling the weapon Jim Bowie used at the Alamo.

"It was the knife, not the six-gun, that the cowboy depended on most for survival"

Bridgeport Gun Implement Co., Landers, Frary and Clark, Lamson and Goodnow and Collins and Co. all distributed Bowies from 1870 until the turn of the century. It's hard to determine which brand cowboys used, though, because Bowies are referred to as hunting knives or pocketknives in the written history of the period. Cowpokes used knives for many purposes on the range.

'Put " Putney, a Texas Ranger, was typical of the men of the era. In an interview in later years, Putney said he always carried a hunting knife with a 5-inch blade, using it to eat with and to dress game.

Contrary to the image of knives projected in movies and on television, few cowhands used knives as weapons. Most would agree with Putney, who said he never let anyone get close enough to fight him with a knife.

Nonetheless, some cowboys occasionally got into knife fights. The most common fighting knife was the Arkansas Toothpick, a sharp, pointed dagger, useless for anything but as a weapon. The Bowie was a fighting knife as well, but it was also a work knife. Several ranches prohibited the use of dirks, daggers and Bowies in the act of knife fighting. 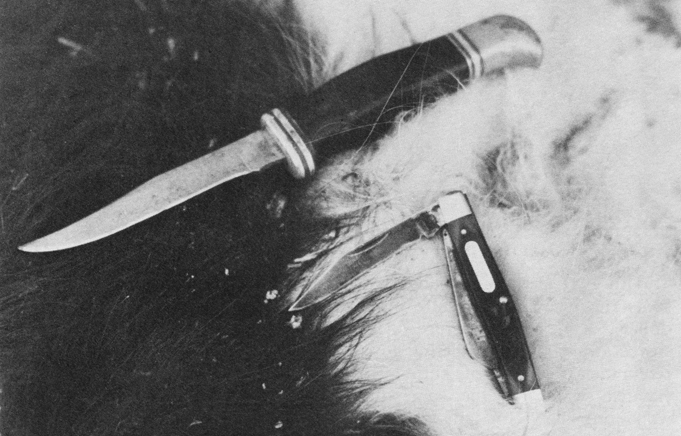 ABOVE : Newer sheath knife and pocket knife on a steer hide. Both could be seen as part of a cowboy's equipment in the 1800s.

Though little is said about knife brands, knives are referred to in many books about cowboys. In Old Time Cowhand, Ramon F. Adams writes that during electrical storms on the plains, cowpokes hurriedly doffed six-guns, spurs, knives, anything made of metal. In The Look of the Old West, Foster-Harris mentions both pocketknives and sheath knives as a part of the cowboy's essential gear.

Uses of knives on the frontier were varied . Dressin g a n d skin - ning game and beef probably headed the list of uses for a sheath knife. Such knives were also used for cutting rawhide for ropes, kneeing (cutting the tendon behind the knee of wild cattle or horses to slow the animals down), digging bullets out of horses and men, and playing mumblety-peg.

A pocketknife was even more essential, especially during branding season. Like sheath knives, pocketknives were seldom mentioned by brand name, though occasionally they were referred to as barlow knives. The original Barlow knife was manufactured in mid-17th century England but other companies made barlow-style pocket-knives, including Ulster and J. Russell.

Russell, with his American version of the barlow, made the names Russell and barlow synonymous, resulting in the famous Russell Barlow knife.

With the demand for pocketknives in the 1870s, firms began making several styles of folding knives, marketing them as stockman and cattle knives. These were large, 3-blade knives, designed for whatever use or abuse the rancher dished out. Russell, New York Knife Co. and various Connecticut Valley based manufacturers made these knives, selling them mainly in the Western states.

Pocketknives have changed little through the years, as have the uses to which ranchers put them. In Cowboy Culture, by David Dray and Old Time Cowhand by Adams, knives are mentioned in the branding of range animals. Dray writes: "Another cowboy takes out his pocketknife - probably sharpened for the occasion - and begins to mark the calf's ear. " Adams calls these "earmarkers" butchers, knifemen or cutters.

ABOVE LEFT : An old Barlow knife, often used on the plains. Many times pocketknives were referred to as "Barlows." (Jim Gatchell Museum, Buffalo, WY)

ABOVE RIGHT : A Ka-Bar stock knife.

He writes: "They squatted on their heels, building cigarettes, and sharpened their knives on little whetstones while the irons were gettin' hot. They used a cowman's ordinary knife which they resharpened every time the work slackened a bit. Not only did they mark the calves, but made future steers out of the young male animals."

Today, on large Western ranches, such scenes are repeated each spring. Pocketknives are still used for ear-marking and cutting, and irons are still heated over a fire. Pocketknives have changed little, except now nearly all the handle material is plastic or composition on the inexpensive models, while older knives had wooden and stag handles. The more expensive brands still sport wood handles, specially treated to withstand almost anything, while the discriminating modern cowhand has a wide selection of knives from which to choose.

The 3-blade knife is still the most popular on ranches. It features a sheepsfoot blade, a clip blade and a spay blade, though a rancher may replace the spay with a leather punch. 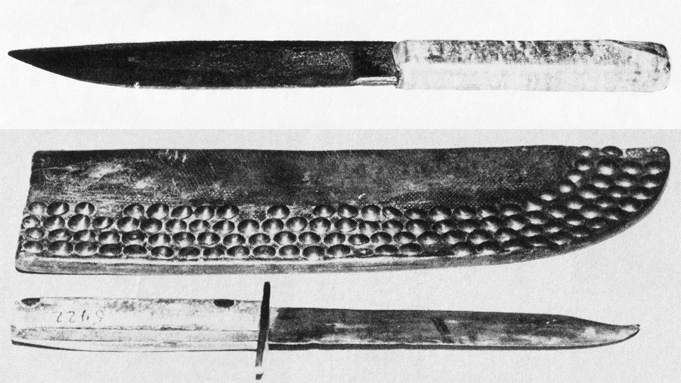 On a typical day in ranch country, a pocketknife might be used to dig a rock out of a horse's foot, cut twine on a hay bale, tighten a screw on a windmill, bob a calf's tail, punch holes in tin cans, chop ice and, when work is over, cut a slice of cheese or a bit of apple for a snack.

A pocketknife today, much like the cowboy knives of an earlier era, goes easily from ranch work to table knife (especially on a picnic), with little more than a swipe across a grubby pants leg to clean the blade. Seldom does a pocketknife see soap and water, though it might be dipped in Lysol a time or two during branding season. 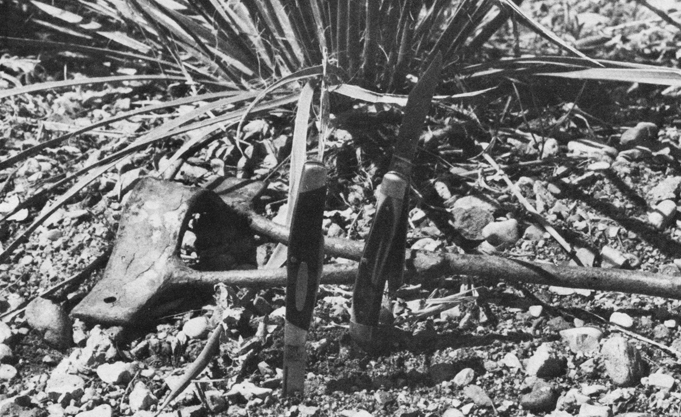 ABOVE : A buck knife and an Old Timer near a branding iron and a yucca plant.

In The Book of Knives by Yvan A. DeRiaz, one quote sums up the feeling cowboys have for their knives: "...it would have been difficult to imagine a man...leaving the house without his pocketknife." This is true of both cowboys and ranchers. They seldom go anywhere without their trusty companion—the pocketknife.