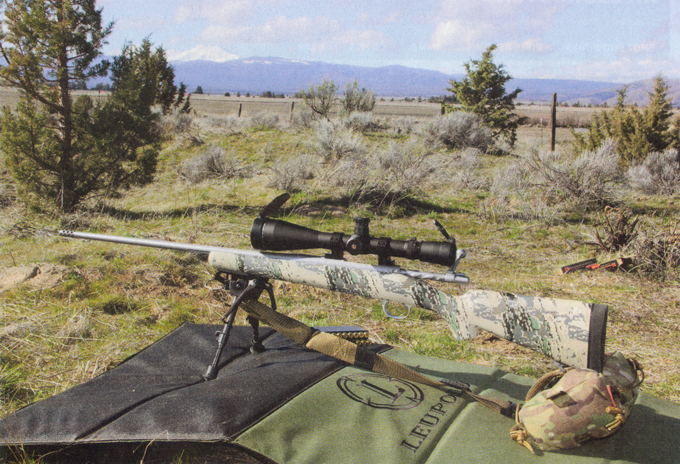 SOME OF THE NOTIONS SHOOTERS HOLD AS FACT JUST AREN'T TRUE. HERE ARE 5 EXAMPLES.

There are certain beliefs that, through repeated citation and general reception, become accepted as unshakable fact. Case in point: Roger Bannister's four-minute mile. Physiologists proclaimed the human body was incapable of running a mile in less than four minutes.

The belief became "fact," and try as they might, no one could break the mark—until Roger Bannister ran a 3:59.4 mile in 1954. That feat opened the floodgates as more runners quickly broke the four-minute mark.

The point is that long-standing beliefs can limit our abilities, and these exist in the realm of rifle shooting as well. With the help of the instructors at Discover Courage, a non-profit that raises funds for veterans by utilizing Navy SEAL scout/sniper instructors to teach donors the basics of long-range precision shooting, here's a hard look at some long-standing beliefs and explain why they aren't true.

1. Headwinds and tailwinds have the same effect on a bullet.

While it's true a zero-value wind (directly toward or away from the shooter) doesn't produce deflection or wind drift, it can affect trajectory. A bullet fired directly into a strong headwind will encounter higher friction and, as a result, will slow down more quickly and drop faster than that same bullet would on a perfectly still day.

Likewise, a bullet riding a tailwind will encounter less friction and will actually shoot flatter than the standard trajectory curve. Does it matter at 100 yards? Likely not, but as shooters push farther out to 600, 800 and 1,000 yards, the effect of variable friction begins to tell on the flight path of the bullet.

2. Uphill and downhill angles are the same.

Yes, when shooting uphill or downhill your bullet's point of impact shooting uphill or downhill will be higher than a shot across the same distance over horizontal ground. For instance, a bullet fired upward at an angle of 30 degrees at a target 300 yards away is only being acted upon by gravity for 260 yards and therefore the shot will impact higher than if the shooter were engaging the target on level ground.

However, the bullet's natural path of flight will cause it to begin to drop after its maximum ordinate (highest point of flight) and after that, the bullet will begin to fall back toward earth. For this reason a long-range uphill shot requires more precise range estimation than the same shot downhill because the "swept space" of the bullet's trajectory is greater down-hill and, therefore, downhill shots are more forgiving.

Light-for-caliber bullets have high initial velocities, and in the early part of their flight path, they shoot flatter. But after both projectiles reach their maximum ordinates, the heavy bullet's added weight fights wind better and retains velocity better. The lighter bullet has less mass and will drop more quickly as friction strips away velocity.

Heavier bullets, then, are more forgiving at long range. The team at Discover Courage likens heavy and light bullets to baseballs and Wiffle balls. It's easy to achieve high initial velocity when hitting a Wiffle ball because it is so light, but the effects of wind and friction are much more pronounced because of the Wiffle ball's lower mass. The same principles apply to bullets. If you're going for a long shot, go with a heavier bullet.

4. The trigger break should be a surprise.

The notion that a surprise trigger break is the best way to deliver a shot is so ingrained in the subconscious of many shooters they simply accept this concept as fact.

But the team at Discover Courage disagrees. In fact, they refer to the unexpected break of a trigger as an "accidental discharge." If you are an accomplished shooter, you should deliver the shot when you want to, not when the trigger happens to break.

Being in command of the trigger requires you to deal with recoil more effectively. The "surprise" break is one fancy way to cheat a flinch: If you don't know when the gun will go off, you won't tense up. But that's simply a bandage designed to cover a gaping wound in your shooting skill set. Recoil mitigation and trigger control are important elements of learning to shoot well.

5. A clean bore is most accurate.

Some shooters thoroughly scrub and clean their bores of carbon and copper after every shooting session, and that may work for some. But for the majority ofserious long-range shooters, a properly maintained bore is a fouled bore.

Scrubbing out a bore after a series of shots can change the internal ballistics in your barrel, resulting in inconsistency in the next string of shots. Since the hallmark of accurate shooting at long range is consistency, by changing these variables you are reducing your gun's accuracy potential.

Instead, remain consistent in your cleaning regimen. One of the instructors at the school, a former director of the Naval Special Warfare Scout Sniper School, simply uses one push of a wire brush to clean the bore of gross fouling followed by a single dry patch after each shooting session. "I want my first shot the next day to be exactly like the last shot of the previous day," he says.

But the need to keep the level of your bore fouling consistent is not an excuse to ignore basic firearms maintenance. The action needs to be kept clean and lubricated, particularly around the chamber, and all barrels will need to be cleaned periodically.