Many companies design their knives to be tools first, not weapons. Cold Steel, however, proudly takes exception.

Let's be honest: Many of us, when holding a large fixed-blade think to ourselves, "if necessary, I could use this as a weapon." Since 1980, Cold Steel has been making knives for those with precisely this mindset, many inspired by founder Lynn Thompson's extensive martial arts background.

A Cold Steel knife isn'tpie you turn to for clearing brush or shaving bark; it's the rough-and-tough blade a hardcore survivalist can depend on to kill game caught in a snare, or to fend off an attacker.

Over time, three knives in particular have proven themselves as exceptionally dependable mainstays: the Trail Master, the Recon Scout and the SRK.

I recently had the chance to work with these tjjree blades, and had no choice but to.conr elude that all three are rugged, trusty knives you can bet your life on.

I put the Trail Master to work to verify that claim for myself. Istarted with some routine chopping tasks on downed trees branches 2 to 4 inches in diameter, a job I might demand of a big knife if I had to cut poles to erect a lean-to or other emergency shelter.

While Lynn Thompson does not advocate batoning, the Trail Master was easily able to handle the job.

The Trail Master's martial arts pedigree was immediately apparent. It was well-balanced and very lively in hand—more like a short saber than a clunky machete.

Its weight, at more than a pound, enabled it to complete those chopping chores easily. Next I tried splitting wood with the knife, using a heavier piece of wood as a baton on the back of the blade.

The Trail Master's blade length and thickness helped it to perform this task well. (Like many folks, however, Thompson is not an advocate of batoning, especially in a survival situation, in which you shouldn't risk damage to what might be your only large knife.)

I made long, smooth slicing strokes with the knife, as I might do in a hurry to fashion tent stakes with sturdy, three-sided points. The Trail Master's consistent sharpness along the entire length of its blade allowed it to slice easily.

I found that, if I changed my grip, I could make fine, detailed cuts, as I might need to do when fine-tuning the trigger mechanism on a snare. I choked up on the blade to good effect.

For the most detailed cuts, I used a two-handed technique: one hand on the grip to stabilize the knife, the thumb or thumb and forefinger of the other hand on the back of the blade applying the precise pressure needed. 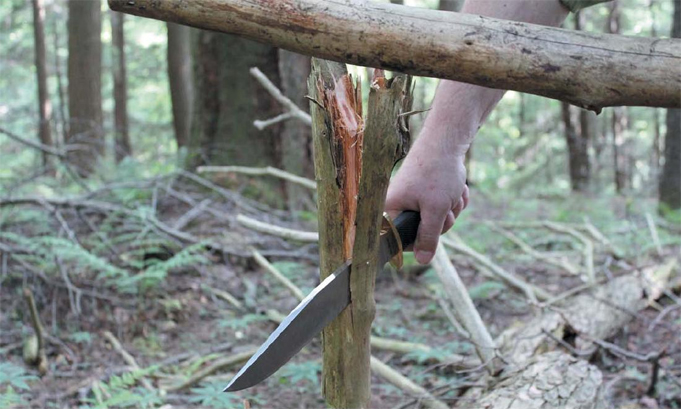 I found the double guard very comforting and I never felt my hand would slip forward onto the blade. "That big double guard—a rarity these days—also gives an extra degree of safety should you be forced to use this knife in a defensive role" Thompson says.

If you're skeptical about whether Cold Steel has really earned its hype, check out the company's two videos showing the impressive torture testing to which they subject their knives: "Proof" and "Apocalypse Proof." The latter is included in current product catalogs.

The Recon Scout is, in many ways, the smaller brother of the Trail Master. Its clip-point blade is scaled down to 7 ½ inches, but it retains the 5/16-inch measurement at the thickest portion of the blade.

The O-1 steel blade is coated in black. When I picked up the Recon Scout, my first thought was that this could be my go-to fixed blade knife.

It offers the heft and power of a larger knife, but would be a little easier to conceal for those times when I don't want to advertise that I'm carrying a large knife.

The Recon Scout performed well on each task I assigned to it. There were times, as with the Trail Master, when I found it slightly awkward to reach around the upper part of the double guard when I wanted to use my thumb on the back of the blade for extra control during detail work.

This was only a very minor annoyance, which I overcame the more I used the knife.

I wouldn't want to get rid of that double guard; I want to protect my hand, whether I'm making heavy duty cuts or parrying the strike of an opponent's weapon.

"Cold Steel is an outgrowth of my martial arts interests," says Cold Steel founder Lynn Thompson. "I started martial arts at a very early age. When I was in the sixth grade, my dad bought me Nat Fleischer's book, How to Box. I read that book and practiced everything in it."

"My mom would get mad at me because I'd wear out the front part of my shoes. I was up on my toes shadow boxing on the asphalt in the driveway all the time and I'd wreck all of my shoes."

"In fact, my mother was so sick of me reading that book that she hid it. I looked all over for my book and I couldn't find it until one day almost three years later, I found it under all these hymnals in the bottom of the piano bench."

Thompson has had gloves on every week since, practicing not only boxing, but also a number of forms of martial arts.

But it's his expertise in fighting with any edged weapon for which he is best known.

In fact, he decided to make his own knives after being disgusted when he broke a couple of another manufacturer's knives during training.

The result was Cold Steel, which he founded in 1980 and has since gained a reputation for the fiercest fighting blades.

While the SRK (Survival Rescue Knife) gives up some reach and chopping power to the two bigger knives, its black, 6-inch, coated clip blade provides perhaps more utility in a handier size for everyday cutting needs.

Simply put, this is the blade I'd be reaching for most often. "It has been truly battle tested," says Thompson. "It remains the standard issue knife of the Navy SEALs for their B.U.D.S (Basic Underwater Demolition Training) after many years of use."

The SRK has only a single guard. Placing a lanyard over the top of the grip, then slipping your hand through the loops that form underneath can keep your hand from sliding forward.

"We here at Cold Steel are very proud of that." I found this knife's shorter blade very responsive, especially with fine detail work when I needed to use the very end of the clip-point blade.

I have found this to be true of many clip points and their ability to perform finesse work. The clip point on the SRK is very sturdy, however, and would not be as prone to breakage as weaker designs.

If you're looking for a solid fighting knife, Thompson bucks the clip-point trend and recommends a drop-point blade:

"[Drop-points] aren't near as good for stabbing as a good clip point."

"If you're fighting, your opportunities are fleeting. They're measured in microseconds. And the difference in getting an inch-and-a-half of penetration and a quarter-inch of penetration could be the drop-point knife that's blunt at the tip."

However, if you must use a clip point:

"[The Trail Master] has the strongest clip point that I could devise. You can choke up on the blade and even though it would be difficult and awkward, you could skin a mouse or an elephant."

"You could do anything with that blade. Its acute point and false edge make it more than capable of fine finesse work too. And I want that double guard to protect my hands."

I used it to carve a dovetail notch, which is a triangular cut used to fit two pieces of wood together without the need for lashing.

All three of these knives have deeply checkered, rubbery Kray-Ex handles that provided a very secure grip even with sweaty hands.

The dovetail notch, when fitted with a piece of wood carved in a matching triangular shape, is a handy way of attaching two pieces of wood without the need for nails or lashings. This was a good test of the SRK's capacity for detail work.

I did not develop any uncomfortable "hot spots" on my hands during the testing.

The sturdy point on the SRK was excellent for making finer cuts.

The Trail Master and Recon Scout tested here were made with O-1 steel, an oil-harded tool steel. The SRK is now made with AUS-8A stainless steel.

THE RIGHT TOOL FOR THE TASK

All three knives proved to be sharp, strong and nimble in the hand. As you might expect, the SRK, as the smallest of the three, handled the detailed cutting chores more easily.

The Trail Master, as the biggest and heaviest, was the best at chopping tasks. It really comes down to choosing the right knife for the right job.

For general camp chores, fine detail work and discreet carry, the SRK would be an excellent choice. I'd step up to the Recon Scout for more heavy duty work and to enhance my defensive capabilities.

If forced to choose one, I'd pick the one knife that I could use to build a shelter, skin a deer and ward off all threat s real or imagined. 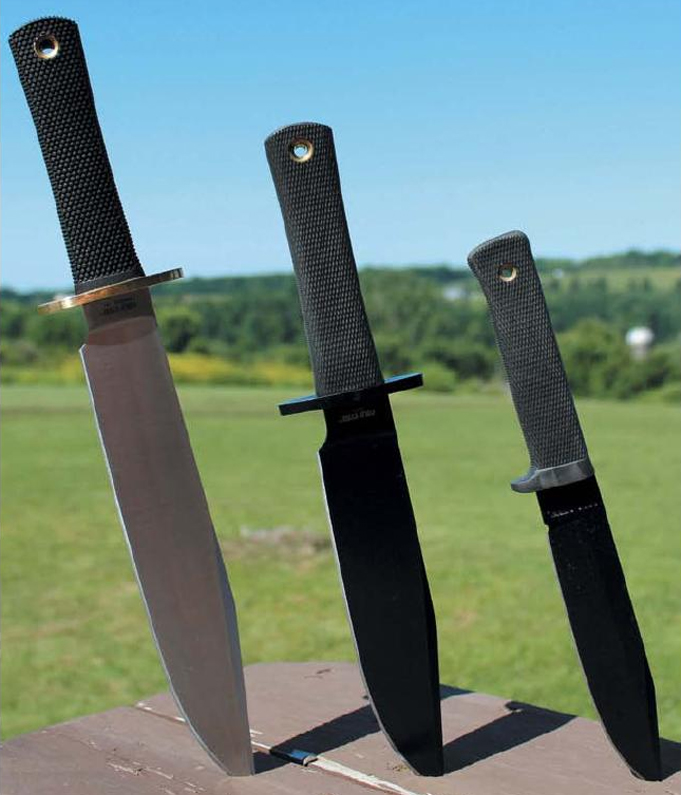 Steven Paul Barlow is a retired sergeant/station commander and former firearms instructor with the New York State Police. An avid hunter, firearms and knife enthusiast, he has been writing on outdoor topics for more than 30 years and is the editor of AK vs. AR magazine.