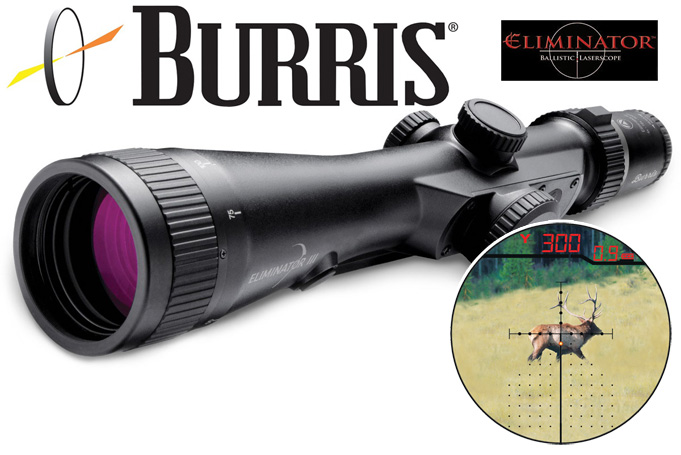 In my youth, a riflescope that didn’t leak or fog up, whose dials didn’t seize and whose cross-wire stayed in the middle, was a scope to covet.

This laser-rangefinding scope, arriving a little over a decade ago, can be programmed to show a lighted aiming point where your bullet will land at any reasonable range and then some.

The first-generation Eliminator is a 4-12x40mm variable. It won’t accommodate scope rings. Instead, an integral 5.75-inch base with two clamps secure it to a Picatinny rail or Weaver bases.

Quick and easy. The clamps, cinched by two hex nuts, have transverse bars to help absorb recoil. (When you attach any scope with clamp-and-bar rings, tug it firmly forward before snugging it down so at least one bar bears on the shoulder of a base slot. Otherwise, inertia will slam it forward during recoil. The result: loose connection.)

Other features on the Eliminator I are more traditional. The helical eyepiece allows you to quickly adjust the reticle focus. Capped, low-profile windage and elevation dials give you 40 minutes of adjustment vertically and horizontally.

The eye relief, 3.5 inches, is reasonably constant throughout the power range. The 25-foot field of view at 4X is modest for the magnification yet wide enough for most hunting situations. At 12X, the field shrinks to 9 feet at 100 yards. The first Eliminator weighs 26 ounces—a bit heavy for a mid-range variable.

But this is an electronic sight with a battery, circuitry and controls. A slotted screw releases the cap on the battery housing on top. The power switch is on the left side, about a third of the scope’s length ahead of the eyepiece.

A four-way setup button on the right side lets you program the scope. Small protrusions low on both sides accept a remote ranging control, a wafer-like device with its own CR2025 battery, plus a strap to keep it with the rifle.

The basic form of this sight hasn’t changed a great deal. The Eliminator II and now Eliminator III boast improvements, and the first-generation 4-12x40mm I used went away. It became a 3.5-10x40mm model.

The 4-12x42mm Eliminator II is cosmetically almost the same, but the factory-rated maximum laser range jumped from 800 to 999 yards. As with any laser-ranging optic, the “reflective target” reach exceeds the range at which the Eliminator will register on animals, which are non-reflective, of modest size and often partially obscured by brush or rocks of similar hue.

Burris cited 550 and 700 yards as the practical outer range for its second-generation Eliminator. The 3-12x42mm and 4-16x50mm Eliminator III models read farther: 1,200 yards on reflective targets and 750 on deer.

If you’re like me, you won’t consider shooting at game that far away, but this scope will show you possible shooting places as you plan a stalking route, and it’ll help you know when you are in range.

With this Burris, you’ll hit steel plates out yonder while your pals are still figuring holdovers. Like the Eliminator II, the III has an inclinometer to compensate for steep shot angles.

Both scopes work at any magnification— unlike the first Eliminator, which had to be set at 10X for range compensation. The controls on the Eliminator III appear in different places than on the original.

The silver-dollar-sized compartment for the CR123 battery is at center left. Inside the cap you'll find handy operating notes for powering up, ranging, setting up and advanced options. The battery location relegates target focus and parallax functions to their traditional venue: a sleeve on the objective bell.

Rotate the sleeve to zero out the parallax and sharpen images at any range, from 50 yards to infinity. Buttons at 4 and 8 o'clock behind the focusing ring serve dual purposes. Press either to turn the scope on and range a distant object.

They're easy to reach with your hand on the rifle's forend. The four-way setup switch has been moved to the left side of the tube, between the power ring and battery compartment. You'll find the low, capped windage and elevations dials where you expect them.

again to finish a three-shot group. (In the field, of course, you wouldn’t have to repeat the ranging procedure; you could fire shots as fast as you could cycle and aim the rifle using the dot established by your initial ranging.) I quickly followed up with another group.

Though the Eliminator Ills are a tad heavier than the first Eliminator at 29 and 30.5 ounces, respectively, the newer scopes aren't as bulky.

The purpose of the Eliminator remains the same: to help shooters hit at long range with a dead-on hold. "It does just that," says Steve West of Steve's Outdoor Adventures.

He's used the Eliminator III on a variety of hunts. "And it's not complicated. I can take a new Eliminator out of its box, and in 20 minutes have it mounted on a rifle, zeroed and sending bullets into a 6-inch gong at 500 yards."

Steve has used the Eliminator III on muzzle loaders to hit vitals at the edge of its effective range. On centerfire rifles, it has helped him and his hunting partners kill beyond 500 yards.

"But reaching way out matters less than ensuring lethal hits at ordinary ranges," he says. "Because the Eliminator takes the guesswork out of range and bullet drop, you can fire with greater confidence at any distance."

Steve adds that "It's the best sight you can get for a muzzleloader or a slug gun. Steep trajectories aren't a problem because you have the exact distance at the press of a button, and the holdover is programmed in."

The first Eliminator to follow me home went on a Sig Sauer SSG 3000 bolt rifle in .308 Winchester. While the Sig has an adjustable comb, the scope worked best with the cheek rest fully collapsed, where I prefer it. The Eliminator comfortably squats low on a receiver. For an AR-style rifle, you might want an elevated rail.

The Eliminator Ill's signal feature is a column of electronically controlled dots on the reticle's lower stem. With the scope switched off, the dots (not the reticle) are nearly invisible.

When you press either power/range button, the battery powers on the laser unit and the display in your scope field. Another push of the button and the display shows yardage to the target.

If you've done no programming, the next step is correcting your hold for bullet drop. The intelligently spaced illuminated dots really help. But you'll get more from the Eliminator by programming it for the load you're shooting, so when you press the ranging button, the reticle shows a single lighted aiming point.

Hold that dot on target and fire. The scope has absolved you of drop calculations; your bullet hits where you've placed the lighted dot.

The setup button lets you specify range in yards or meters, and gives you the option of zeroing at 100 or 200 yards. Then you pick a drop number from the supplied table. That number derives from inches of bullet drop for a given load at 500 yards, with a 100-yard zero. After you use the setup button to lock in that number, the scope remembers it until you change it.

In my tests of the original Eliminator, I chose a 150-grain load for the .308 and set the scope for the drop number of 155. Then I zeroed at 100 yards. Ordinarily I'd zero at 200, but I wanted to see how the scope would correct for drop from a zero many hunters still use and is still useful in many places.

Trotting a target out to the limits of the desert wash in front of my firing line, then thumbed 150-grain .308 loads into the Sig's magazine and settled the heavy rifle on bench bags.

With the Eliminator's reticle on the target, I pressed the ranging button. The display read 395 yards. A small orange dot glowed on the reticle's bottom bar. I steadied it on the target, fired, then deliberately repeated the routine, getting a second shot off before 80 seconds had elapsed and the Eliminator's brain automatically shut down.

I ran through the ranging process again to finish a three-shot group. (In the field, of course, you wouldn’t have to repeat the ranging procedure; you could fire shots as fast as you could cycle and aim the rifle using the dot established by your initial ranging.) I quickly followed up with another group.

Back on the setup button, I changed the drop number to 163, filled the magazine with 175-grain loads and fired two more groups.

The results with both bullet weights were impressive. The 155 setting sent 150-grainers about a minute low, while at 163 the heavier bullets struck about that much high.

The best groups came from Winchester 150- grain Ballistic Silvertips and Black Hills 175-grain Match rounds. Both were about 2.5 inches wide—just over 0.5 MOA. The 4 inches of vertical error could have been erased by tweaking the drop number in the sight.

Burris, in fact, suggests "proofing" loads against the chart. Ballistic coefficients listed by bullet-makers depend on velocity (affected by temperature and barrel length) and on atmospheric conditions.

Had I set the scope with a slightly higher drop number for the 150-grainers and a slightly lower one for the 175-grainers, they would have struck within an inch of center. At 400 yards, that’s spot on.

Naturally, the more distant the target, the more crucial the accuracy of your data. Last I checked, Burris provides drop numbers for about 1,500 factory loads. With an assist from any ballistics program—or even just ballistic coefficient and velocity data—you can add handloads. That information will also help you predict drift.

I had estimated the 150-grain Ballistic Tips from Winchester and Fiocchi loads would drift about a minute in the breeze loafing across the range that day. They did. Sierra 165-grain GameKings and 175-grain MatchKings showed no significant drift.

While I didn’t hammer nails to test the durability of the 4-16x50mm Eliminator III now atop a LAW rifle in .280 Ackley Improved, I have it on good authority that this is a rugged scope.

Steve West recalls easing down a rock face toward a mountain goat when he lost control of his rifle "and watched it cartwheel over a cliff onto a slide 500 feet below...I found the rifle badly scarred [and] was afraid the violent fall had knocked that Eliminator off zero."

He didn’t want to miss or cripple the goat, which hadn’t moved. So he fired at a spot on a rock 100 yards in the opposite direction. His bullet blew chips from the spot.

"I killed the billy with my next round. That Eliminator is bomb-proof!" It will also endure just about any hunting weather. You can expect it to work in temperatures as low as -15 degrees Fahrenheit and as high as 120.

"If anything, Burris has understated its limits," says Steve, who took one on a four-day musk ox hunt and saw the mercury fall to -38 degrees. The rifle lived in a case, but outdoors to avoid external condensation. "The scope performed perfectly."

And battery life? Burris claims the battery is nominally rated at 5,000 cycles. Steve says his first Eliminator battery expired after two years of frequent use. "The newer versions haven’t died on me yet."

Because Steve has put many field hours on Burris Eliminators, he’s accustomed to their controls. "Pressing that ranging button is second nature; it’s located right where I put my thumb, and I don’t even think about it. There's really nothing slow about operating this scope, nothing you can’t learn in an hour."

The 4-16x50mm Eliminator III on my .280 also has a remote cable switch, so the scope can be turned on and off, and the ranging function actuated, from wherever I want to put that switch.

The Burris Eliminator III comes from good stock, but it offers more features, more magnification and more reach than its forebears.

It’s what you might want if your shooting is typically long and you’re tired of the uncertainty imposed by unknown distances. 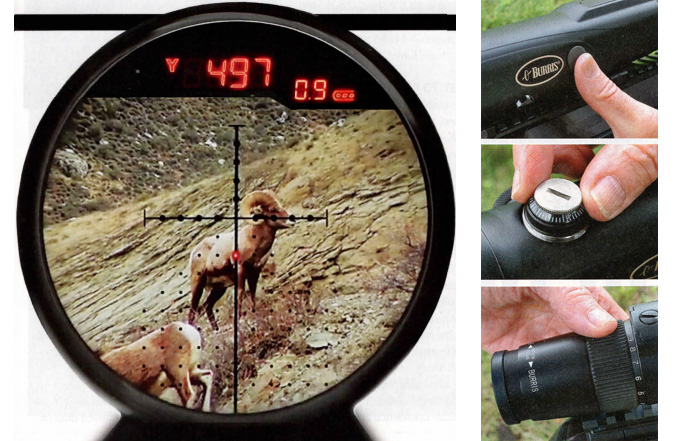