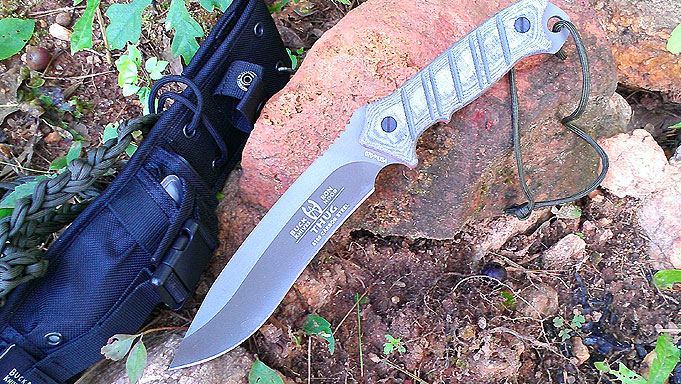 I like to carry a big, stout knife when in the woods. I once had to chip through ice for water, and a pocket knife just won't do it. I like a knife that I can chop, pry, dig and hammer with, but that will still hold an edge. The Buck Knives Thug meets all of those demands — in spades. I also carry a folder for smaller chores.

Buck Knives should be familiar to all S.W.A.T. readers. An American, family-owned business since 1902, Buck became famous for the Buck 110 folding knife, which almost everyone carried in the 1970s. Over the years, Buck created a series of excellent knives, from folders to fighters to bush knives.

Ron Hood (1944-2011), a Vietnam vet who made films and wrote books on wilderness survival, designed a series of survival knives in collaboration with Buck. The last in the Hood series, the Buck Thug knife, was unveiled at the 2016 SHOT Show. The Thug is 13 inches overall, with a seven-inch blade, and it weighs 11.6 ounces.

The blade is made of high-carbon 5160 spring steel, so it takes an edge very well, and is heat treated to Rc 57-59, so it holds the edge. The full-tang handle is stout, nearly a quarter-inch thick, so it won't break. The removable handle stocks are Micarta, and the Shock Mitigation System really works.

I pounded on the spine with a stick when I was splitting kindling and it nearly eliminated the felt impact at the handle. The Thug comes in a nylon sheath with a pouch for a stone, small folder, or multi-tool. The knife is made in the U.S.A. and retails for $200.00.

A bush knife needs to do a number of things: clear brush for a shooting lane, cut poles for a shelter, split kindling for a fire, maybe dig a small hole. And it needs to do these things and leave a decent blade edge for cutting.

A bush knife needs to do a number of things: clear brush for a shooting lane, cut poles for a shelter, split kindling for a fire, maybe dig a small hole. And it needs to do these things and leave a decent blade edge for cutting.

I spent a couple of days in Man Camp in the forests of northern Idaho. Man Camp is a gathering of like-minded souls: veterans, shootists, martialists, and preppers who train, exchange information, and establish networks for future cooperation. This gathering was a good opportunity to test the Thug.

Shelter is a primary need in a crisis. I carry a Proforce Equipment Stasha shelter with me all the time. This light-weight shelter can be set up in a variety of ways. I prefer to use a ridgepole set between two trees. One way to obtain said ridgepole is to cut a one- to two-inch diameter stick, eight to ten feet long, from local vegetation.

Any alder or willow sapling will work, and the idea is to cut it easily. I selected a proper alder and was able to cut the two-inch pole with two strokes of the knife, then cut off all the twigs and branches. I cut a couple of stakes to hold guy lines, and notched them with my small folder.

When campfire time came, I dug a small trench with the flat of the Thug. I gathered small twigs and branches, then split some larger wood as described above, and soon had a decent small fire going.

Every bush knife is a trade-off—a balance among size, weight, and utility. If the knife is too big and heavy, you won't carry it. If it's too light and small to do the chores outlined above, its usefulness is questionable. The super-duper 27-blade bottle-opening, can-opening, awl-and-screwdriver carrying army knife might work for some chores, but fails when strength is really needed.

We all like fighting knives. I have the same Randall #1 that I got 45 years ago. The reality is that none of us will ever need a true fighting knife, but all of us may need a large utility knife that can be pressed into defensive service. The Thug fits all these roles, is made in America by Americans, and is reasonably priced, making it a good choice.

EDITORS REPORT : This knife is by no means a combat or survival knife, if anything, I'd class it as a blade that falls somewhere between a pocket knife and a utility knife. It doesn't exhibit many of the requirements to qualify as a combat knife - but....! exceeds many pocket knife specifications. The shock absorbtion full tang skeleton handle is a nice idea in theory - though in practice, under heavy use, can fracture with ease. If you have your heart set on this fixed blade knife, make sure you are purchasing for the right reason (self defense, light utility, skinning).