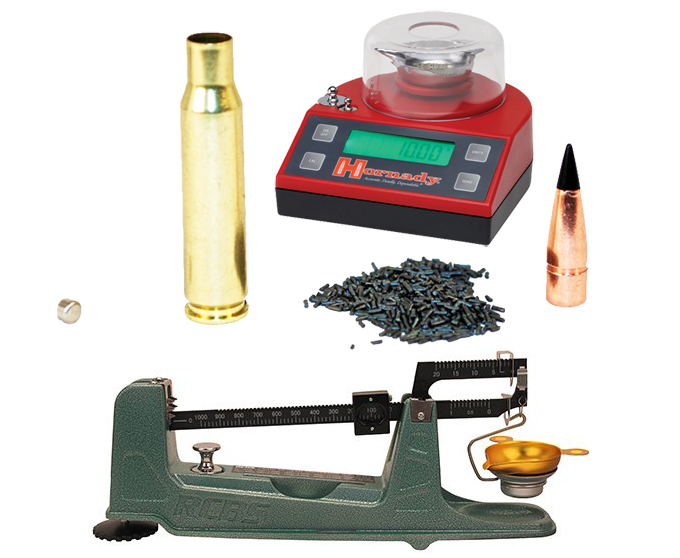 ARE ELECTRONIC SCALES ANY FASTER OR MORE EFFICIENT THAN MECHANICAL SCALES?

As with all electronics, the past two decades have seen significant refinement in electronic scales. So much so, in fact, that mechanical scales would seem on the edge of obsolescence. However, big reloading companies continue to sell large quantities of this "archaic" type ofscale, and in fact RCBS just introduced what may be the most refined, capable mechanical scale yet.

Contrary to information-age expectation, mechanical scales continue to be popular because they have tangible advantages. I recently acquired one of the aforementioned new RCBS M1000 scales along with one of Hornady's fine Lock-N-Load electronic scales and worked both out at my bench, taking notes on ease of use, any perceived weaknesses, and using tips for both types ofscale in general. Here's a look at each type of scale individually, including pros, cons and helpful user hints.

Electronic scales bring some cool technology to handloaders, but at a price. First, unless you've got one of the compact range-type scales designed for occasional use and fit with batteries, your electronic scale is power dependent. So when the tornado's passed and the danger gone but the TV doesn't work, you can't fall back on your favorite hobby to occupy your time.

In the Hornady lock-n-load bench scale electronic powder scale review, as with any electronic scales, they are dependent on a level surface for accuracy. If your bench-top has even a slight tilt most likely your scale won't calibrate. If it won't calibrate, it won't measure accurately.

On the subject of calibration, don't throw away the instructions. Every model ofscale is a little different, and until you've got the calibration process memorized, you'll need to shrug off your manly side and read those instructions. And yes, you absolutely need to calibrate your electronic scale every time you use it.

Also, the Hornady lock-n-load electronic bench electroinic scales are some what sensitive to interference. That doesn't mean you can't play your radio while reloading, but it does mean you've got to be cautious about anything magnetic (interchangeable - head magnetized screw drivers, for instance) being too close to the unit while in use.

However, the biggest source of wacky readings that I experience is air movement. Why do you think all decent electronic scales come with a clear plastic shield for the tray? Even a breath of air from the AC vent across the room can screw with your scale. So if your trusty electronic scale seems possessed, shut the windows and any air vents near it, and keep the kids from breathing on it.

On the plus side, once calibrated electronic scales tend to be easier to use than mechanical scales, for several reasons. For starters, zeroing on the Hornady lock-n-load electronic bench scale 50108 is as simple as pushing a button. Ta-da! You're ready to weigh.

An advantage I really appreciate— because I seem to be all thumbs while reloading — is the easy access to the powder pan atop an electronic scale. I can pour in a charge of powder thrown from my mechanical measure without worrying that I'm going to bump the scale and mess it up, or spill some of the propellant granules because I've got to tip the powder in just so to get past the beam and suspension hook of a mechanical scale.

Although one features cutting-edge sensors and computers and the other harks back hundreds of years, performance between the two types of scales is remarkably similar

Additionally, once weighed you can just pick up the powder pan, funnel it into a cartridge and set it back atop the scale. Easy access is a thing of beauty when a fumble often equates spilled powder or a scale that's been knocked out of kilter. And one of the things I love the most about an electronic scale is that no matter how shakily I place the powder pan on the tray, it doesn't swing. It just sits there quietly and weighs.

Electronic scales aren't necessarily more precise than mechanical scales, but they are considerably easier to achieve precision with because the weight of whatever is in the powder pan is displayed in easy-to-see numbers on the scales screen. You don't have to get at eye level with the scale's balance beam, and 0.1 grain reads as 0.1 grain rather than just a slight disparity in the alignment of a pointer.

On the subject of weighing, most of the good electronic scales weigh considerably more than the average mechanical scale, to the tune of 1,500 grains or even 2,000 grains. Price for a decent electronic scale ranges from about $60 to $150 depending on model and manufacturer.

Every reloader should have a mechanical scale. They're not dependent on electricity, so if you're a preparedness-minded individual, that counts for a great deal—whether you anticipate reloading in the bushes while the zombies raze the family farm or you're just a good Boy Scout. And even if you're an electronics kind of guy, a mechanical scale is great backup and can be used to spot-check the calibration of your primary scale if it begins behaving a bit erratically.

But mechanical scales are not without their downsides. To me, the biggest difficulty with a mechanical scale is reading it precisely. Instead of just watching a digital readout as you trickle powder, you've got to hunch over, get eye level with the pointer on the end of the balance beam and make sure it's perfectly level with the reference point.

Also tricky is the process of sliding indicators and setting a specific target weight. If you were alive during the moon landing, the system will seem easy; if you learned your math on an iPad, it might not.

Mechanical scales aren't as sensitive to light air currents or magnetic waves as their electronic cousins, but they sure don't like heavy vibration or getting bumped. If you happen to drop a wrench on the bench while setting up a sizing die, you'd better check and ensure that your sliding indicators haven't jarred off a notch or two. And if you bump the scale itself, you'll likely have scattered parts to deal with.

Plus, mechanical scales, even the RCBS M1000 mechanical scales are swingers. Not fun swingers like Austin Powers but annoying swingers. Unless you place the powder pan on the tray carefully, with no biased pressure, the durned thing will trapeze back and forth like a pendulum. It's tough to get any sort of accurate read until you stop the swing.

My only other complaint with mechanical scales is limited access to the powder pan. Necessarily the pan is suspended on a tray that hangs from the end of the balance beam, so the beam itself and the tray hook get in the way and make it hard to place the pan on the tray without knocking the scale or leaving the tray and pan swinging. Careful fingers make a non-issue of it, but if you're a bit shaky, they can play havoc.

On the plus side, RCBS M1000 mechanical scales have a leveling mechanism and aren't level-surface dependent, so you can always get yours zeroed. To set, just put the weight sliders on the zero point and dial the leveling wheel until the scale indicator reads zero. Price for a decent mechanical scale ranges from about $65 to $160 depending on model and manufacturer.

After using each type of scale for most of a day's worth of reloading, I timed how long it took me to charge 10 rifle cartridge cases with each. Using a Franklin Arsenal powder measure, I threw charges about two grains shy of my target weight, then used a Hornady Quick Trickle to bring each charge up to final, exact weight on the scale. If I went over even 0.1 grain, I removed granules with a tiny spoon until the charge was perfect.

Charging the 10 cases took me fractionally over five minutes with each type of scale. Interestingly, I was actually 12 seconds faster with the RCBS M1000 mechanical scale, but the times were so close that repeating the test could result in the opposite result.

To evaluate precision, I used the electronic scale—which I'd calibrated and then crosschecked with another scale of known accuracy—to weigh five consecutive charges trickled on the mechanical scale. I paid very close attention, and four of the five charges were precisely on the target weight. One of the five was 0.1 grain high. Both scales read exactly on when checked with calibration weights.

Because of the easier access to the powder pan and tray, and because reading the digital display is laughably easy compared to the sliders and pointer on the mechanical scale, I've got to give the efficiency nod to the electronic scale.

Whether your scale is space age or archaic, enable it to do its best by giving it a solid, stable surface to work from. I always screw my reloading bench to the wall with heavy 3-inch deck-grade screws. It's amazing how much less movement your bench will have and how problem-free your scale will suddenly become.

Use a shot glass. When throwing powder charges with a hopper-fed measure, don't use your scale's powder pan to catch the charge. Gravity-sped powder granules will always ricochet around and escape the pan, no matter how careful you are, and if using a mechanical scale, the pan will swing after being placed on the tray.

Instead, catch the powder charge with a shot glass—which won't hold static electricity—and pour it from the glass into the powder pan. No lost granules, no swinging pan.

Develop a pattern and rhythm. As you charge a case tray full of primed cases, refine your system until you develop an efficient pattern, stick with it and get in a rhythm. You'll be faster, and most importantly more consistent, which makes for accurate, safe reloads.