A Handful of Hard Men 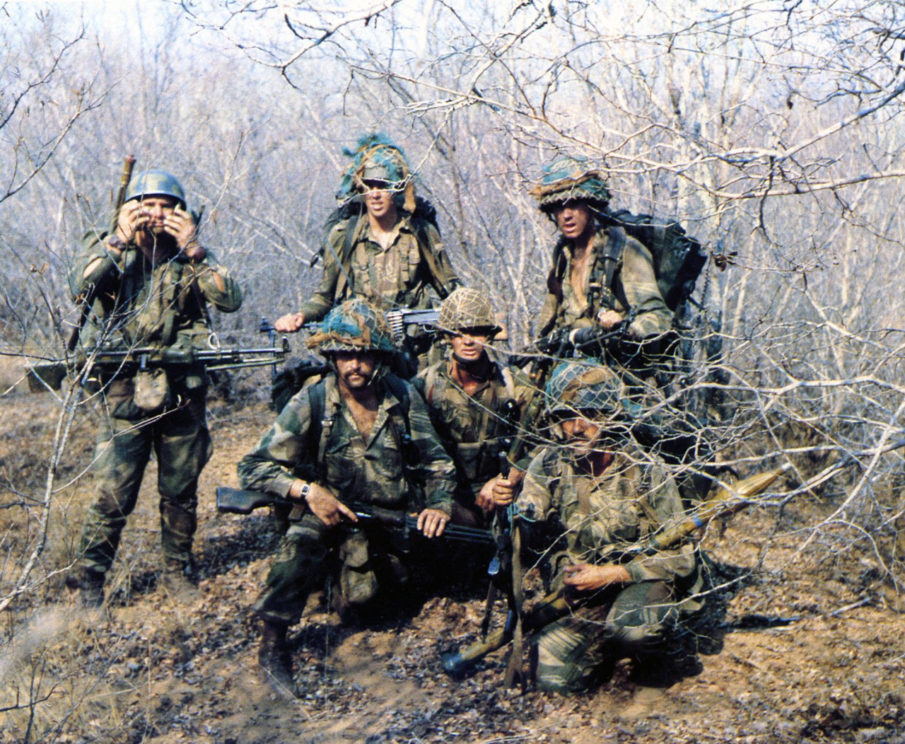 During the West’s great transition into the post-Colonial age, the country of Rhodesia refused to succumb quietly, and throughout the 1970s fought back almost alone against Communist-supported elements that it did not believe would deliver proper governance.

During this long war many heroes emerged, but none more skillful and courageous than Captain Darrell Watt of the Rhodesian SAS, who placed himself at the tip of the spear in the deadly battle to resist the forces of Robert Mugabe and Joshua Nkomo.

It is difficult to find another soldier’s story to equal Watt’s in terms of time spent on the field of battle and challenges faced. Even by the lofty standards of the SAS and Special Forces, one has to look far to find anyone who can match his record of resilience and valor in the face of such daunting odds and with resources so paltry.

In the fight he showed himself to be a military maestro. A bush-lore genius, blessed with uncanny instincts and an unbridled determination to close with the enemy, he had no peers as a combat-tracker (and there was plenty of competition).

But the Rhodesian theater was a fluid and volatile one in which he performed in almost every imaginable fighting role; as an airborne shock-trooper leading camp attacks, long range reconnaissance operator, covert urban operator, sniper, saboteur, seek-and-strike expert, and in the final stages as a key figure in mobilizing an allied army in neighboring Mozambique.

After 12 years in the cauldron of war his cause slipped from beneath him, however, and Rhodesia gave way to Zimbabwe. When the guns went quiet Watt had won all his battles but lost the war.

In this fascinating work we learn that in his twilight years he is now concerned with saving wildlife on a continent where they are in continued danger, devoting himself to both the fauna and African people he has cared so deeply about.

It has almost been forgotten, but hundreds of former ADF and NZDF soldiers fought in the post colonial wars against Communist revolutionaries in southern Africa, particularly in Rhodesia now known as Zimbabwe.

Historian and veteran of the Rhodesian anti-communist struggle Hannes Wessels' A Handful of Hard Men: The SAS and the Battle for Rhodesia is an absolutely stunning record of the Rhodesian Special Air Service which alongside Rhodesian Selous Scouts and the famous Rhodesian Light Infantry successfully maintained tactical supremacy against Mugabe's far larger and better equipped revolutionary militants backed by Russia and China.

If I hadn't closely followed the Rhodesian Independence struggle at the time, it would be hard to believe Wessels' amazing account of micro numbers of Rhodesians prevailing again and again in both set piece battles and unconventional warfare against the vast black communist ZIPRA and ZANLA militias and a host of bordering black revolutionary state armies. But the book is historically solid. These events really happened.

A Handful of Hard Men is a soldier's story told through the weapons' sights of Rhodesian SAS veterans as they carved through the massed ranks of their enemies - employing ruthless aggression and initiative instead of soft 'hearts and minds' COIN policies in an heroic but ultimately doomed bid to stay free from Robert Mugabe's dictatorship.

Wessels retells Rhodesia's fall using the words of the outnumbered Rhodesian troops who flung themselves like modern day Spartans at their black adversaries leaving an enormous kill count in their wake. The author has been condemned by the politically correct, but his Rhodie language is historically accurate.

Unlike Australia which has become so politically correct that crack roo shooters cannot even get into the Army, the Rhodesians recognised the skills of their legendary white hunters to track down and eliminate their foes.

Outnumbered ten to 20 times. Rhodesia's soldiers were astonishing warriors who held their ground for 15 years against the entire world, including, sadly the Australian Whitlam and Frazer Govts who politically supported Mugabe.

A Handful of Hard Men is a true story about the death of a brave little nation that went down fighting like demons before impossible odds. Buy it.